Dance and the Circus come face to face in an innovative and startling cultural fusion.

“Acrobats for Dance and for the Circus” seals the deal between the world of Dance and the various disciplines of the Circus. The partnership aims to stimulate reflection on the benefits of eliminating the cultural barriers that still exist between differing forms of artistic expression. The meeting of Dance and Circus disciplines becomes even simpler if the Dance in question is of the acrobatic form: Acrobatic Dance on the one hand and Circus Acrobatics on the other. Both forms of expression, albeit via different methods, aim to charm the audience in a similar manner, using the results of intense physical training and technical skills combined with grace and elegance, all presented within specially crafted choreography.

The Acrobatic Dance Championships “E.D.C. – Extreme Dance Championship” (Rome, Sunday 23rd September 2012, Teatro Greco) and the “International Circus Festival – City of Latina” (Latina, 18th – 22nd October 2012, in via Rossetti), as events of singular importance within their respective spheres in Italy, are the ideal venues for the encounter between the world of Dance and the world of the Circus.

“E.D.C. – Extreme Dance Championship” hopes to attract artists from various European countries. This will be the first edition of an event that aims to involve athletic dancers in competition within Italy. E.D.C. is, at the moment, the only Festival of its type to take place in Italy. Many different forms of acrobatic dance are represented in the E.D.C., including experimental and innovative forms which, however, will still require a sound technical base. Candidates from all over Europe are welcome to apply to compete: as well as being a competition it is also an excellent international showcase for performers, who will be seen and judged by an illustrious Technical Jury. The Artistic Director of the event is Davide Zongoli, a young Italian talent who, as well as being in charge of the national AcroDance section of FISAC, is national pole dance champion of Italy, and was placed fifth in the 2011 World Pole Dance Championships in Budapest. E.D.C. is organized by Associazione DanzaSì, which has been promoting dance and dance events through the periodical publication of the same name for the last twenty years, through the efforts of Luana Luciani and Monica Ratti.

“The International Circus Festival – City of Latina” and “E.D.C – Extreme Dance Championship” will reinforce this new partnership via a series of activities together that will also see each event represented at the event of their ‘twin’. 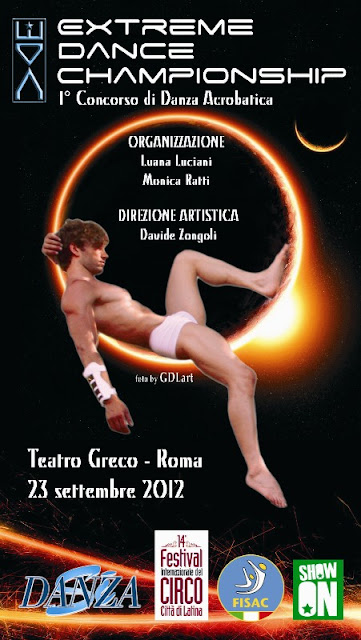